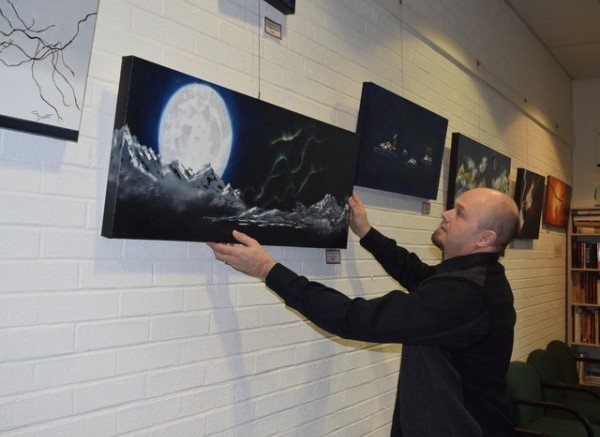 By: Indiana Nash
In: Art / Nature
With: 0 Comments
NISKAYUNA — Sometimes, the best things happen unexpectedly, or so Tim Dobert found last year when his artwork began to take off.

“It had always been a hobby for me … something I used to make sense of the chaos of life,” said Dobert.
But what began as a hobby in 1994 has turned into a full-time career for the retired law enforcement officer. “I spent 25 years in the field of law enforcement, both as a correctional officer and as a patrol officer, but I would not consider going back after this,” said Dobert.

His days are more peaceful now as he pursues his artistic passions. He currently resides in Clifton Park with his wife and three sons. The family also plays host to three cats, several fish and an uninvited duck.
Dobert’s first exhibit was last year in Saratoga Springs at Uncommon Grounds, the popular locally owned coffee/bagel cafe. He was surprised when people wanted to purchase his work and when others asked him to exhibit. “I’ve had no formal training, I was completely self-taught,” said Dobert.

Growing up, he drew constantly: comic strips, portraits, charcoals, etc. Despite his lack of formal training, Dobert has gone on to make a second career out of his passion. Earlier this year, he also became a part-time art teacher to spread his love and knowledge of the medium with others.During his time in law enforcement, Dobert spent many years as a training officer, and developed a knack for teaching. “It’s nice to share the art with others and kids can really become more rounded individuals through it,” he said, also noting that it’s much easier to guide students through an art lesson than a fleet of officers during a training exercise.

Dobert’s work is now on exhibit at the Schenectady Jewish Community Center and he is booked for exhibits at various venues for the rest of the year. Within the current exhibit, Buddhism and his deep love of ninjutsu martial arts are the biggest visible influences in each piece. Most have an Asian theme or style, though Dobert has recently tried out other painting styles.

“I paint what I love and what I’m most interested in,” he said, which turns out to be quite a range of things. Among the paintings on exhibit at the community center, there are beautiful landscapes, guitars, wine, a horse and an eagle.
“I would never paint anything that would cause turmoil,” said Dobert, nodding very seriously, reflecting on his Buddhist values and influences. For now, his work is broadly themed but as time goes on he plans to narrow this range of subject matter and influences down to what he feels most represents him.

Beyond exhibiting at several venues locally, Dobert sells his art through several websites: vangough.com, fineartamerica.com, and artpal.com. Keeping up with these demands can be a challenge, but it’s one that Dobert gladly takes on. For any of his exhibits, he takes at least three to six months to paint all of the pieces and have each one dry in time to be hung. Because Dobert wants recipients to feel like they are receiving only original work, he will never repaint the same piece for two customers. He will make print copies, but that’s where he draws the line

“Painting has taken on a life of its own!” Dobert exclaimed, cheerfully surprised at how far his work has taken him in the past year alone. With his wife managing his exhibit schedule and with his deep love of painting, Dobert is on track to make even more of a name for himself on the local art scene. The exhibit of Dobert’s oil paintings currently featured at the Schenectady Jewish Community Center will be going on until the end of March.