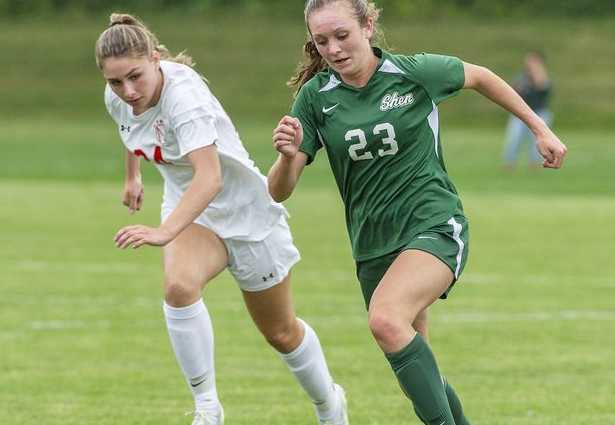 Each moment is a chance to improve for Shenendehowa girls’ soccer

By: Indiana Nash
In: Sports
With: 0 Comments

It’s all looks a bit unusual — but it’s par for the course this season for Shenendehowa, whose primary aim has been to use every opportunity it can to get better.

“That’s what a lot of our conversations are about,” Nirsberger said. “It’s ‘are you leaving today better than you were yesterday?’ ”

Shenendehowa — which is 8-1 overall, and 8-0 in Suburban Council play through Sept. 28 — has been strong since the start of the 2015 campaign, outscoring its opponents 30-7. Its pre- and post-match routines, though, are all about reminding the squad it still has lots of work to do if it wants to secure a Section II Class AA title this season.

Working hard before and after games is something Shenendehowa has embraced this season. The pre-game push-ups are pumped out when the team’s players do not field airborne balls correctly, a tactic which serves as a reminder to the team’s players to take warmups as serious as the 80 minutes of action to follow.

“That’s our team-discipline thing,” senior midfielder Meghan Cavanaugh said. “When our goalies punt the ball and we let it drop, we have to all do the push-ups. Because when it drops, it becomes a 50-50 ball in real, live situations.”

Meanwhile, the post-match sprints are a result from moments in the game where the Plainsmen do not regain possession quickly enough. Every time the squad loses the ball, it has 10 seconds — the “Shen 10,” Cavanaugh called it — to take back the ball; for each time the Plainsmen fail at that task, it has an extra sprint to run after the game.

“Which is good because it allows us to really get the mentality that we need to get the ball back so we don’t have to pay for it later,” she said.

Sophomore forward Mia Longo said she has played on other teams in the past that had to run after games, but those squads sprinted for a different reason.

“It was usually because we lost,” said Longo, whose team has lost only once this season. “But this way is good, too, because it shows us we need to always improve and work harder.”

Shenendehowa got a taste of where it can improve in a recent non-league game against Massapequa, the state’s top-ranked team. The Plainsmen lost that game 4-0, but walked away encouraged after holding the game to 1-0 through halftime and 2-0 until the last 10 minutes.

“Going in, we were expecting it to be a tough game,” said Kaitlin Davis, a junior midfielder. “It was surprising to see we could hang with them — we actually dominated a lot of the first half. It lifted us up and showed us we’re capable of a lot more, even though we ended up losing.”

Losing is not something Shenendehowa has grown accustomed to this season, in which the squad has not trailed in any of its Suburban Council games. Even so, Nirsberger said she knows her team has a lot more to offer this season than it has shown yet.

“Our potential is still way above our performance right now,” Nirsberger said. “We still have that mountain to climb for now, of trying to get the most out of everyone. This is a great group, but we’re looking for more.”