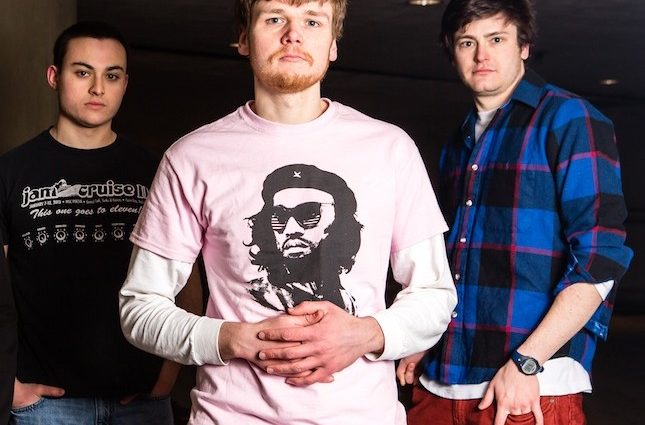 Three years ago, Doctor Magnum — an up-and-coming local band — was just getting started.

Now they play at a variety of venues ranging from Parish Public House in the heart of downtown Albany to Fontana’s in the Lower East Side of Manhattan. If you tune into 102.7 WEQX on the radio, you can experience their synthesis of rock, funk, hip-hop and jazz.

On Friday, Feb. 27, they filled Parish Public House with their hypnotic melodies and solo improvisations.

Bandleader, guitarist and Clifton Park native Charlie Button tells us about how they blend various genres, the beauty of staying strictly instrumental, and their temporary fixation with orange juice:

Q: When did you first discover your passion for music?
A: I think I was 7 or 8 years old when I really started listening to music and it became one of the biggest things in my life. I didn’t pick up an instrument — the guitar — until I was 15.

Q: Did you feel like your time at Shenendehowa helped you grow musically?
A: I didn’t take any music classes in high school; I was on track to do graphic design. Then I started teaching myself how to play, and I knew if I didn’t pursue music I would regret it and wonder, what if.

Q: Where did you go to college?
A: I started at Schenectady County Community College majoring in music business, and then I transferred to SUNY Oswego and did just music.

Q: Were you and guitarist Jerome Steele friends, since you both grew up in Clifton Park?
A: Yeah, I met him when I was 7 years old in Little League, but we weren’t really friends until middle school. We’ve been friends a long time.

Q: What made you guys decide to connect and form Doctor Magnum?
A: We had a friend Matt, who was a drummer, and he was back in town from school and he called me up and suggested we get together and jam. So I invited Jerome and one other friend who plays bass to play and it sounded a lot better than you would think with no practice, just improvising the whole time. We thought, why don’t we just try to make this a band.

Q: How did Rob Colpoys — your current drummer — get involved in the band?
A: After a month or two, Matt — the drummer — got a job in the city working for Showtime, the TV network, and moved. So we put up a Craigslist ad for a drummer and Rob came and he was the perfect fit.

Q: What made you decide on the name Doctor Magnum?
A: It’s just a silly juxtaposition of words, and it sounds like a band name.

Q: How would you describe your sound and your genre?
A: I’d say we use traditional rock instrumentation, play funk and hip-hop influenced music and we use a jazz approach to improvisation. So it kind of fuses all of those genres together.

Q: What do you think sets your band apart from other up-and-coming bands in the area?
A: The way we approach improvisation, I think. We do a lot of active listening and responding to specific things that people are playing rather than going along listening to ourselves; whoever is soloing, they are driving the bus and we are doing whatever we can to push them to wherever they want to take things.

Q: What is typical show like for you guys?
A: Right now we are mostly playing public bars like Parish Public House, which use to be called Red Square, The Hollow, Fontana’s; music venue bars that actually have a stage.

Q: Where do you see the band going in the future?
A: It’s hard to tell because we’ve been in flux: first bass player not working out, the keyboard player to replace him didn’t work out, but we just got a new bass player a few months ago so we are still trying to figure out what kind of direction we can take with him and where it will naturally lead.

Q: What do you do on the side?
A: I have a job at The Vitamin Shop in Niskayuna selling vitamins, supplements and whey protein. I’m also teaching guitar lessons, which has been great.

Q: Do you hope that one day the band becomes the full-time job?
A: Ideally that would be great.

Q: You do the majority of the writing of the original songs, correct?
A: Yes.

Q: So what inspires your writing?
A: I just try and listen to as much music as I can and absorb what I can. I keep an open mind to what I listen to and I’ll be inspired and find parallels between different types of music that maybe other people wouldn’t see and it just gets regurgitated back onto the page.

Q: Who is your greatest influence musicwise?
A: Even though I’m not wild about a lot of his music, I like and have respect for Miles Davis. He developed a very distinct sound and then once he got where he wanted to go with it, he just abandons it and go on to something else; I really respect that dedication to evolving as an artist.

Q: What was your first music memory that you can remember?
A: It’s actually one of my first memories, period. I was 3 years old and my parents took me to see Ray Charles at the Starlite Theater in Latham. I don’t remember a ton about the music, but I remember being there and the crowd.

Q: Your band doesn’t have a vocalist, how do you feel that sets you apart from other groups?
A: I think a lot of people respond to lyrics, so that’s like a hurdle we have to jump being an instrumental band, but it frees us up to do variations — night to night, every song is going to be different, instead of a singer singing the same words every time. There’s more room for interpretation.

Q: Do you guys have any traditions that you do before each show?
A: There was a while when we would drink orange juice before every show to play better, but that didn’t really stick.