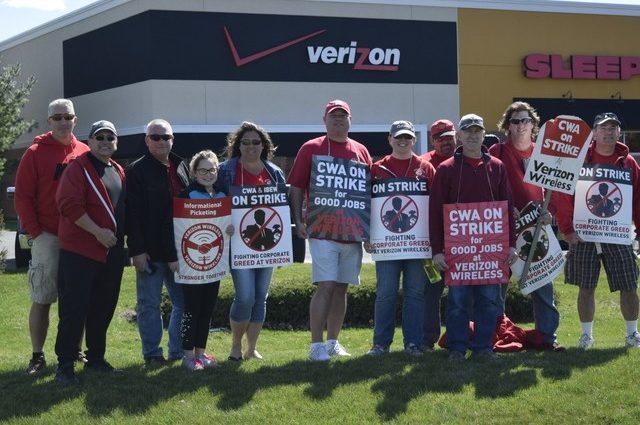 As thousands of Communications Workers of America members continue to strike across the northeast after contract negotiations stalled last week, about a dozen Verizon workers and their family members gathered to protest outside the Verizon store between 11 a.m. and 3 p.m. on Route 146 in Clifton Park Tuesday, April 19.

Passing cars honked to show their solidarity as the group walked back and forth on the sidewalk in front of the Verizon store with signs which read, “CWA on strike for good jobs” and “On strike fighting corporate greed at Verizon Wireless.”

According to Beth Fronczek, a Halfmoon resident who has worked for Verizon for 24 years, the current strike began Wednesday April 13.

A press release from Verizon’s corporate office stated, “Despite Verizon’s good faith efforts to get to new labor contracts, CWA and IBEW [International Brotherhood of Electrical Workers] leaders, unwilling to make an agreement or even seek the assistance of the Federal Mediation and Conciliation Service (FMCS), have called a strike as of 6 a.m. today. Verizon has activated its business continuity plans as customer service remains the company’s top priority.”

The company’s business continuity plan includes reassigning employees to different posts and training thousands of non-unionized employees to fill in for those striking.

Fronczek works as a central office technician for Verizon. Her mother also worked for the company while raising her five children single-handedly. Fronczek is concerned that some of Verizon’s plans for its workers, including potentially relocated employees out-of-state for months at a time, will force many workers to choose between family and work. “This impact’s families,” she said, noting that relocating would be nearly impossible for some single parents. She thinks this policy was designed to get people to quit and break up the union.

Fronczek said their contract expired in August and “any offer we were given [since then] has been worse than the one before.”