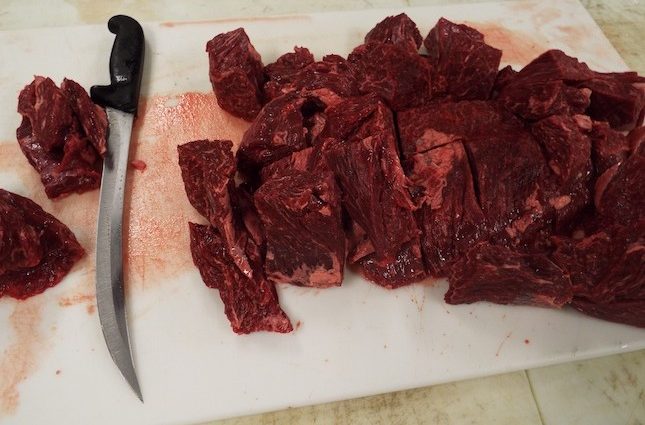 Primal: Your Local Butcher may be nestled next to other retail locations at 22 Clifton Country Road, but upon walking through the door it’s as though suburbia has been left behind.

Primal resembles a corner deli one would find on the hectic streets of Brooklyn or Manhattan; a diverse store that, besides the main meat offerings, contains a mix of items one could find in a grocery store, minus the aisle-to-aisle setup.

About a year ago, the name of the business was changed. In the confusion during that transition, many people thought they were closed. “We are exactly the same business, we’re just no longer affiliated with the national chain,” owner Kevin Wickert said. Primal was once “The Meat House,” a chain out of New Hampshire that closed its doors. “I’ve always owned the business and always run it the way I am now, but now I’m a pure local independent.”

Strolling around the store, one will find a variety of craft and local brews, seasonings, dressings, bags of chips, bread and necessary basics such as lettuce. Free samples are out on a daily basis, staying warm within a silver chaffing dish, so that customers can “try it before they buy it.”

However, meat is first and foremost the juicy backbone of this establishment. Three massive glass cases house a mouthwatering assortment of cuts and flavors. There are three USDA grades of beef commonly sold: Prime, choice and select, in order from greater to lesser moistness and tenderness.

Primal only carries prime and choice cuts, and only those that are antibiotic-free, all-natural and have never been frozen.

“What sets us apart is the level of quality we sell; the most important thing for us is that everything is prime and choice and everything is fresh — that’s key,” Wickert said. “Sometimes when you go into a butcher shop, it’s meat that was bought some time ago, frozen, and was thawed for you, but this is all fresh. We don’t even have a freezer.”

Meat, like any commodity, has price fluctuations for those looking to buy it. Some suppliers and retailers stock up when the cost is low and freeze the meat prior to thawing and selling it in order to save money.

Primal avoids this by utilizing multiple suppliers ranging from a handful of local producers such as Buckley Beef to a farm in Wisconsin that has all natural, antibiotic-free beef. A significant part of the week consists of finding, selecting and purchasing meat. There are many things that they must take into consideration: grade, how it was fed and raised, how it was slaughtered and making sure that people can keep up with the demand.

“If someone comes in for a prime cowboy steak and we don’t have it, we may not see that person again so we have to make sure we have what we need,” Wickert said. “That’s why we use multiple suppliers.”

Primal is also known for marinating meat. This takes place in the back walk-in cooler, set to 43 degrees. Meat is cut into pieces which are put to spin within a stainless steel tumbler — a pressurized vacuum that is filled with meat and marinade. It removes oxygen from the equation, which pulls the meat fibers apart, allowing flavor to travel all the way through the meat.
Primal also places a significant focus on maintaining a high level of customer service. “I have a great staff; many of these guys have been with me since 2009,” Wickert said. “They are restaurant people, hospitality people; we’ve built a nice business over the last five years.”

Special requests are not just allowed, they are welcomed. “We do things that most places don’t do,” Wickert said. “Some customers have requested exotic meats such as antelope, super lean ostrich, alligator and venison.”

At Thanksgiving, they sell all-natural fresh turkeys, and will brine them if the customer wants that. The salt-water solution makes it nearly impossible to overcook the turkey. “Instead of sending you home with a kit, we do it for you,” Wickert said.
Most people come to Primal in search of something to make for dinner, and there’s plenty to choose from in the display case: Ready-to-pop-in-the-oven meats, marinated steak and turkey tips, seasoned and prepared vegetables and starches, stuffed chicken and pinwheels of pork stuffed with cheese and asparagus. Other options make a complete meal possible.

“We like to make it convenient for the customer to go home, heat up something so it’s like having a home-cooked meal that’s not pizza, Chinese … it’s healthy,” Wickert said. “When I was in graduate school my favorite professor said, ‘When you’re going into business, look at the way people live and try to find a way to make their lives better, easier,’ and that has resonated here.”

Wickert completed his undergraduate degree at Le Moyne College in Syracuse, near where he grew up, and then went on to obtain his MBA from RPI.

“I’ve owned and operated retail businesses in this area for the past 15 years, this is my 14th store,” Wickert said. “I used to own a chain called Super Cuts for 91⁄2 years, with 11 stores in three states — Massachusetts, Vermont and within the Capital District.”

The co-owner of each business has been his wife, Christine, a Clifton Park native and Shenendehowa graduate who he met in college.

Lately, Primal has been expanding its horizons. “We’ve always had a deli, but we never really focused on it. . . . Now we are spending some time promoting it, it’s growing by leaps and bounds,” Wickert said. “The thing about that is, that it’s a fresh-made sandwich. We are going to make it in front of you.”
Also, since the middle of January, Primal has tables situated in the center of the room. “It’s bringing more people into our store,” he said. “On a really cold day when you order a sandwich the last thing you want to do is go anywhere, it’s easier just to sit down, eat it and be done.”

As of a couple of weeks ago, Primal incorporated a savory addition to act as a sidekick to their sandwiches: homemade soups. “It fits with the deli; people like them.” The cold winter also has really helped boost the appeal of soup. Every week they concoct three different soups and serve two per day. They are constantly changing, but so far, the comfort food classics are the favorites: clam chowder, chicken noodle, cheddar broccoli.

Wickert and his wife are also looking at opening another store in the area of North Greenbush or Niskayuna as well as a couple of delis with just a small meat case. The Clifton Park location totals 3,000 square feet, so a deli would be only about 1,200 square feet, and would consist of carry-out foods along with some of their signature offerings. “We grew from nothing to where we are now and we’ve maintained that with continuous gradual growth,” Wickert said. “We’ve experienced respectable growth.”

His goal is that Primal keeps developing, one cut at a time.