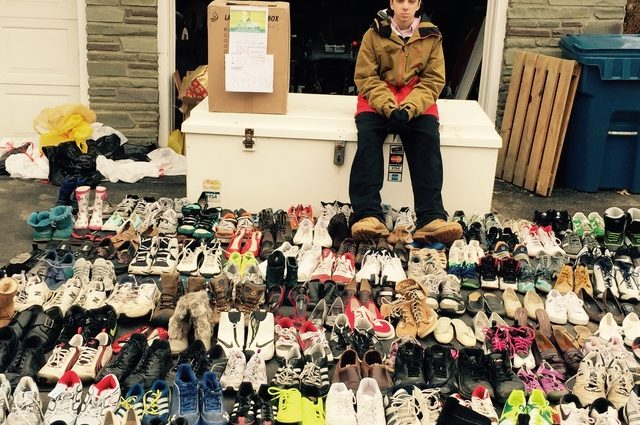 By: Indiana Nash
In: Niskayuna Streets
With: 0 Comments

On a recent January afternoon, he was wearing work boots, not sneakers, for fear the icy slush would ruin a favorite pair. But they still weren’t far from his mind.

Zeiser works at Play It Again Sports in Latham, where he often helps people find the right shoes for the next big game. He also uses Facebook to sell collectible sneakers, such as limited-edition Nikes, to footwear fanatics often referred to as “sneakerheads.”

He even helped his older brother Ryan, a freshman in college, start an online shoe business, where a collectible pair of blue-and-black Nike Foamposites recently sold for more than $6,000.

“You want to look for the hype of the shoe,” he said. “You can do really well.”

So when he became inspired to help others by working with his friends in Students Advocating a Positive Environment (SAPE), a club at Niskayuna High School, it was obvious what he would focus on.

Zeiser collected shoes for Soles4Souls, a nonprofit whose mission is to help use shoes to eliminate poverty. Their model is relatively simple: the group collects shoe donations, then sorts and sells them to micro-enterprise groups in impoverished areas all over the world. The micro-enterprise groups then hire and train workers in communities where job opportunities are virtually nonexistent, which then creates much-needed revenue that stays local and grows the economy.

“Shoes are in high demand for micro-enterprise programs because they are universally needed and valued, can be easily bartered for other goods, and are a tangible commodity that is easy to transport and sell,” the Soles4Souls website explains.

Micro-enterprise can be as small as vendors in open-air markets selling shoes from a folding table, but, as Soles4Souls’ website explains, it’s better than donating because a flood of free goods can crush the fledgling economies of developing countries.

Zeiser picked the charity after a great deal of research. Of the many nonprofits that deal in shoes, “It just seemed like the most well put-together,” he said.

He collected donations in a box at Play It Again Sports, where he also put up posters and passed out fliers. From late November to early December, his neighbors, friends, parents’ friends and other acquaintances from around the community all dug into their closets to contribute.

His original goal for the drive was to collect 100 pairs of shoes, a target his friends and family helped him leave in the dust.

“I almost doubled it, which is awesome,” he said.

In the end, Zeiser collected more than 180 pairs of “any type of shoe you can imagine,” as he proudly put it.

Persuading his friends and neighbors to donate their shoes to a good cause, especially one that aligns so closely with his interests, came easily to Zeiser. He’s always been entrepreneurial, even as a small child.

“When I was really young — this is adorable — I started my own car-washing business,” Zeiser said.

He and his friends would run lemonade stands and, later, a small landscaping business, which his neighbors supported.

Zeiser says he got his business-mindedness from his dad, who had a small landscaping business after college and, over time, parlayed his success into a corporate career.

The array of shoes are packed up now, ready to be shipped to Soles4Souls headquarters in Tennessee, where they can be sorted and delivered to the people who will feed their families and grow their hometowns’ economies by selling them.

Zeiser said he plans to pay the nearly $200 in shipping costs himself, helping out new entrepreneurs with money he earned from his various business ventures. He is also planning a second, larger drive in the spring.

2018-11-04
Previous Post: Justin Yurchak makes All Star Game
Next Post: Town Pools are the place to be