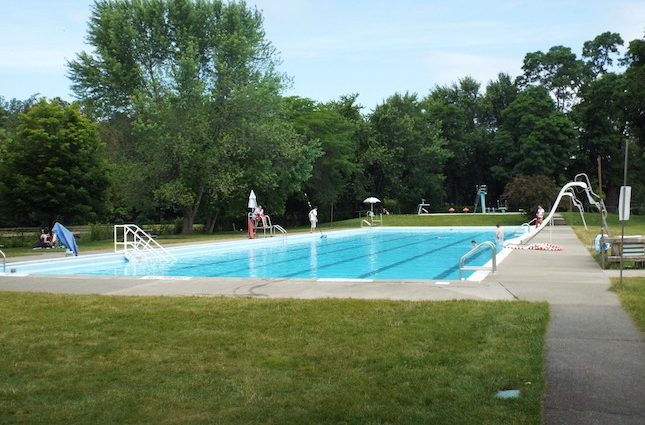 Town Pools are the place to be

By: Indiana Nash
In: Art / Nature
With: 0 Comments

In the Clifton Park community, there are three municipal pools where people to flock to and enjoy.

“The town pools have been a resource for the community for decades; they not just a place to come and swim, families come here and use it as a place for socializing,” Director of Communications and Technology Dahn Bull said. “They are wonderful places to be.”

It’s a typical morning at Barney Road pool: Children are taking swim lessons, they giggle in their goggles, disappear under the glassy surface, then re-emerge with a gasp and a smile.

Ten years ago, Susie Schwarz was one of those kids, examining the innards of the pool with her eyes protected by plastic. Now, dressed in her grey Shenendehowa State Championship T-shirt, she is one of the lifeguards watching over their safety. In the fall, she will begin her freshman year at Canisius College as a Division 1 swimmer.

And to think … it all began at the Barney Road pool.

“Our Learn to Swim program is one of our largest; we have 1,300 kids with us this year,” Bull said. “So we are teaching 1,300 kids in the community how to swim — you can’t beat that.”
“It can be up to 1,000 per day if you include the swim lessons,” Swim Director David Czechowski said. “The classes consist of about eight kids and there is an instructor and a helper — volunteer kids usually 12 or 13 years old who help out, the ones who will eventually become our instructors after they get certified.”

He gazed at the pool and a smile stretched across his face. “I learned to swim here, volunteered and kept working on up; many of our instructors were here learning to swim.”
“He was one of my lifeguards years ago,” Pool Director Duane Nichols said with a chuckle. “My kids went through the program here and they both went on to swim in college; my oldest son went to UMass and my youngest went to Stevens Institute of Technology.”

The basics of swimming are learned and expanded upon; it’s an important ability to have.
“It’s a lifelong skill,” Nichols said.

“Swimming is essential for three reasons,” Czechowski said. ” The first is safety; you want to be able to go on a boat and not fear going overboard. The second is recreation; it’s a great place to spend the summer, relaxing at the pool, but you can’t relax if you’re not comfortable in the water. And I also see it as fitness; I would say it’s even better than running because you’re breathing is that much more critical — you have to pay attention to that. It has to be regulated, it has to be stretched. And it’s also easier on your joints.”

The first town pool was Locust Lane, opened in 1962. The next was Country Knolls in 1966, and then Barney Road finally showed off its deep end in 1970.

When you walk into Barney Road pool, you can’t miss the mural of the sea on the wall, full of coral, creatures and rare species of fish. These gill-breathers are out of the ordinary because they were crafted within the minds of children and exist only in this painted ecosystem.

“I did one of those fish,” 17-year-old lifeguard Brittney Eisnor said. “I was 10 years old!”
As the lesson came to a close, children climbed the ladders out of the chlorinated water and immediately wrapped themselves in towels, tattooed with brightly colored characters and designs. Bodies shivered, lips were tinted blue and teeth could be heard chattering from a distance. Despite their frozen state, they were all back in the pool in no time.

But first it was time to head over to their parents, take a seat and inhale a PB&J.
The next session of swim lessons will start next week, and there’s still time to register. The program is three weeks long.