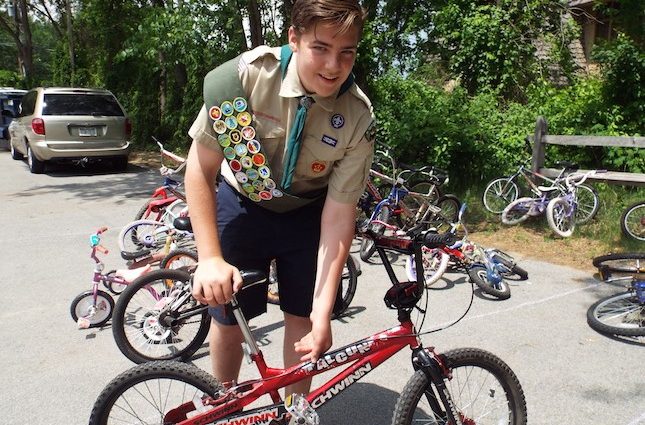 For the past six years, 14-year-old Andrew Mika has risen in rank from Cub Scout to Boy Scout and now he is going to possess the coveted title of Eagle Scout.

The leaders of Troop 3101 have aided several young men in ascending to the top and earning the Eagle rank; Andrew is going to be the 18th in an 18-month time span. An impressive statistic by any measure.

“I’m really excited; my uncles all got their Eagle and a lot of my friends have gotten their Eagle as well,” Andrew said. “It’s been a competition to see who could get it first, but I’m younger than all of them.”

In order to attain this echelon, the Acadia Middle School student needed to organize, lead and complete a service project on behalf of an organization or the community.

Andrew decided to center his project on something that he knows like the back of his hand: bikes.

“Our family has been cyclists for years,” his mother, Janine Mika, said. “My husband is part of the Mohawk[-Hudson] Cycling Club, and he has run the GE bike-to-work week event for the past 15 years. We are avid about bicycle safety and sharing the roads; both my husband and I have had interactions with traffic that haven’t ended well.”

A couple of years ago, she was hit by a car, and her husband, David, was once taken out by a snowplow.

“It’s important for cyclists to know where to be on the road and for cars to be aware of bikes and to share the road,” she said.

Andrew’s plan had a couple of layers. The first was the collection of old bikes and bike parts to benefit the Troy Bike Rescue — a non-profit that is devoted to taking old bicycles out of the waste stream and as much as possible renewing them, restoring them and rebuilding them through volunteer efforts. It provides a place for people to come, volunteer hours and learn maintenance skills; they earn a bike they can build themselves.

Troy Bike Rescue is also associated with Bikes for Humanity in Saratoga. Any surplus bikes or bikes parts that Troy Bike Rescue receives goes to Bikes for Humanity, which sends them in shipping containers overseas to Third World countries that need that kind of help.
“It’s so cool to take that affluence we have here and be able to share it,” Janine Mika said. “Everybody loves to have a bike.”

Multitiered event
At 11 a.m. May 30, bikes glistened and gleamed in the sunlight at Collins Park. The styles ranged from neon hues with training-wheel attachments to sleek, speedy mountain bikes.

That wasn’t all Andrew had up his sleeve; after the donations were received, he switched gears and had a couple of avid area cyclists and the Clifton Park safety department on site to do bike and helmet fittings for kids and bike safety demonstrations, then closed out the event with a four-mile family fun ride on the trails.

“Its multitiered,” Janine Mika said. “Letting people know that there is a place that they can take their bikes and helping to keep cyclists on the road safe. It’s really sad to see the number of white crosses or bikes — that’s a typical memorial for someone who has been killed by a car or a truck. Also, the trails in Clifton Park are great for bikes; we are trying to get awareness of the trails out so that people can use them.”

When it was time for the ride, adults and children snapped the clasps on their helmets, threw one leg over the seat of their bike and pushed off the ground, breaking into at the circular motion of pedaling.

All one could hear was the whirring purr of the metal chains that filled air, like a round of applause.