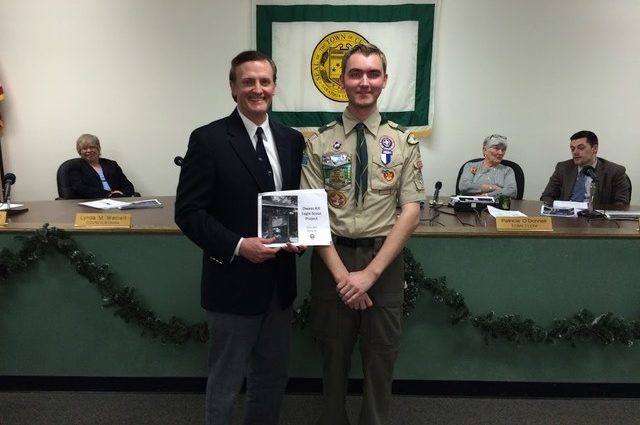 By: Indiana Nash
In: Spotlight
With: 0 Comments

Chris Bell, an 18-year-old senior, created the website — http://cliftonparkopenspaces.org/ — as part of his Eagle Scout project.

His project, which took about a year to complete, was focused on the Dwaas Kill Nature Preserve. Bell raised $1,300 for materials and enlisted the help of 20 volunteers to mark the walking trails, create and install railroad safety signs, refurbish an old kiosk and build a new informational kiosk at the Preserve’s Pierce Road entrance.

The final part of Bell’s project involved working with town staff and the Open Space, Trails and Riverfront Advisory Committee to build a public website to promote the town’s parks, preserves and open spaces. “I did all the site development — from web hosting to picking the content management system to creating all the pages to contacting photographers to get permission to use to use their photos,” said Bell.

Bell attended a summer computer course at Worcester Polytechnic Institute over the summer, which he said came in handy. His father helped out whenever he ran into a snag.

Bell said Open Space Coordinator Jennifer Viggiani and Clifton Park’s Director of Communications and Technology, Dahn Bull, were “both extremely helpful and provided a lot of support and guidance.”
He added” “This project would never have been completed successfully without them.” Bell also credited Clifton Park Town Supervisor Phil Barrett, who Bell said “was also very supportive.”

“At the end of the project, he asked me to present the work at a Town Board meeting, which was also a great experience,” said Bell.

Bell lives in Clifton Park with his parents, his younger sister Lauren, his pet turtle Fire and Lauren’s guinea pig, Anabelle. His parents both work in Albany for the state government. Chris Bell has lived in Clifton Park all his life. “When my parents married they decided to settle here because they felt it would be a great community to raise a family in. An added bonus is that we have a lot of relatives nearby,” he said.

The Scouts have been a major part of Bell’s life since first grade when he joined as a Tiger Cub.
Since joining all those years ago, Bell has traveled a lot of miles with Clifton Park’s Troop 45. Some of his scouting adventures include going to summer camp, deep sea fishing, camping and hiking in the Adirondacks and backpacking in New Mexico. Two summers ago, Bell said he and a crew of Scouts backpacked over 50 miles in the back country of New Mexico and summited the highest mountain in the Cimarron Range — an experience he described as “incredible.”

Bell is leaning toward WPI and RIT since they’re both known for their computer science programs. He hopes to find work in the technology field.

While he is still waiting to hear back from a few colleges, Bell said he’s received only acceptance letters so far. “I’m waiting for a couple more responses in March and then I’ll make the big decision on where to go,” he said.
When he’s not studying or working on scout-related projects, Bell enjoys working with his 3D printer and playing the violin in Shen’s Chamber Orchestra.